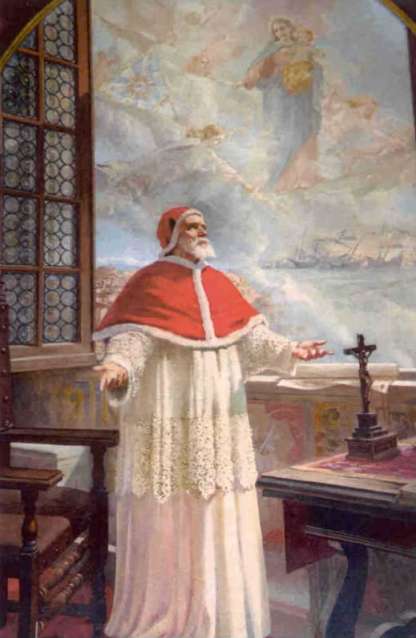 from Friar Blog:  Below is an English translation of the homily then Fr. Augustine DiNoia, O.P., preached to the members of the Congregation for the Doctrine of the Faith on their patronal feast in 2004. The Mass celebrated by then Cardinal Joseph Ratzinger, the Prefect of the Congregation.

Imagine the scene: A cold January day in 1566, one saint kneeling at the feet of another in the Sistine Chapel. St. Charles Boromeo begging Michele Ghislieri to accept election as the successor to Pope Pius IV. The normally strong and self-controlled Cardinal Alessandrino (as Ghislieri was known) had burst into tears when St. Charles commanded: “In the name of the Church, pronounce your acceptance, most Holy Father!” “I cannot! I am not worthy,” he kept repeating. At last, Cardinal Boromeo’s ear caught the barely audible words of acceptance, and the Dominican Cardinal Alessandrino became Pope Pius V.

Since arriving in Rome over a decade earlier, the saint had wanted nothing more than to return to the beloved Dominican Friars with whom he had spent his life. At the suggestion of Cardinal Carlo Carafa, Pope Julius III had brought him to Rome to become Commissary General of the Inquisition. When a few years later, Carafa became Pope Paul IV, and Fr. Michele implored the new pope to allow him to return to his convent so that he could “live and die as a Dominican,” Carafa responded by making him a bishop and then a cardinal, saying: “I will bind you with so strong a chain that, even after my death, you will never be free to return to your cloister.” It is no surprise that, as a cardinal and even as pope, Michele Ghislieri strove to be faithful to the Dominican vocation he had first embraced when he was twelve years old.

The young Michele had startled two Dominican Friars who were passing through Bosco (the town of his birth) by asking if he could become one of them. They were so impressed by his answers to their questions that, with the blessing of his parents, they allowed him to travel with them to the priory of Voghera in Lombardy where his vocation could be tested. From the start, the Friars loved the boy. They called him a treasure, for his progress in the spiritual life outstripped his rapid advance in his studies. As a novice in Vegevano, his fellow novices looked upon him as one already far advanced on the road to sanctity – silent, recollected, prudent, yet docile, humble, reverent towards his superiors, and jealously observant of the Dominican rule.

There is no time this morning to recount his activities in his long life as a Dominican, most of it spent in studies, teaching, preaching, and governance. Ordained a priest in Genoa at the age of twenty four, Father Michele was known by his brethren to be the first to kneel before the Blessed Sacrament in the morning, and the last to say farewell at night. As a young professor, he used to say to his students: “The most powerful aid we can bring to this study is the practice of earnest prayer. The more closely the mind is united to God, the richer the stores of light and wisdom that will follow its researches.” His brilliant defense of the faith during the Dominican provincial chapter at Parma in 1543 brought him to the attention of the College of Cardinals, and he was subsequently appointed to the difficult and thankless post of Inquisitor at Como. A few years later, he would be called to Rome to head the Inquisition, and here he remained for the rest of his life.

We cannot enter into the many achievements of his pontificate: his implementation of the reforms of the Council of Trent, especially in the liturgy; his promotion of devotion to the Rosary; and his successful efforts to mobilize the leaders of the nations against the threat of the Turks (of whom it was said that they feared the prayers of the pope more than they feared all the armies of Europe).

Although St. Pius was never able to return to his Dominican cloister, the legacy of St. Dominic remained with him in at least one important respect that is also significant for us and for our work in the Congregation: love of the truth and zeal for souls. His intellectual formation as a Dominican, combined with his long experience as a champion of the faith, gave him a profound awareness of the power of error to contribute to unhappiness and disorder in human life, and thus of the authentically pastoral necessity of proclaiming the full truth of the Catholic faith without compromise. In imitation of this great saint, we must pray for the love and the zeal that form the deepest wellspring for the proclamation of the doctrine of the faith.

The election of Cardinal Alessandrino had not been greeted with much enthusiasm by the people of Rome on that cold January day in 1566 because he was regarded as too severe. At the time, he had prayed: “God grant me the grace to act so that they may grieve more for my death than for my election.” Such was indeed the case when St. Pius V died peacefully in the early hours of the morning on the 1st of May 1572.

This entry was posted on April 30, 2010 by catholicid. It was filed under Archbishop DiNoia, Order of Preachers, Saints .