VATICAN CITY, 31 MAR 2011 (VIS)
Pope Benedict’s general prayer intention for April is:
“That through its compelling preaching of the Gospel, the Church may give young people new reasons for life and hope”.
His mission intention is:
“That by proclamation of the Gospel and the witness of their lives, missionaries may bring Christ to those who do not yet know Him”.

The Uniquely Catholic Approach to the Global HIV Pandemic

A lot of ink has been devoted to the Catholic Church’s unwavering prohibition on condom use, particularly in AIDS ravaged Africa.  In fact, Pope Benedict’s historic visit to Cameroon back in March of ’09 was overshadowed by the following response to reporters on the plane ride there:

“You can’t resolve it with the distribution of condoms,” the pope told reporters aboard the Alitalia plane heading to Yaounde. “On the contrary, it increases the problem.” (Huffpo)

A maelstrom of ‘controversy’ dominated the media, with some pundits going as far as accusing the pope of killing Africans.  In his recent article, George Weigel wrote about the Vatican’s decision not to reappoint Lesley-Anne  Knight for a second, four-year term as secretary general of Caritas International, a global network of 165 Catholic agencies working primarily in the Third World on development and health-care issues.  Worth reading in full, following is an excerpt which offers the best perspective on the Catholic position of condoms and AIDS:

The Annunciation – Solemnity of the Incarnation

When we think of the Incarnation, the Word was made flesh and dwelt among us (Jn 1:14) we mostly think of Christmas and the baby Jesus.  But nine months before Christmas, on March 25th, a life began at conception.  Today the Church celebrates the very moment of the conception of the Son of God, when the Word–in fact–became flesh and dwelt among us in His mother’s womb:  Behold, you will conceive in your womb and bear a son,and you shall name him Jesus (Lk 1:31).    This reality was recognized by St. Elizabeth and St. John the Baptist:  “Most blessed are you among women, and blessed is the fruit of your womb.  And how does this happen to me, that the mother of my Lord should come to me?  For at the moment the sound of your greeting reached my ears, the infant in my womb leaped for joy. (Lk 1:43-44)

Is there no greater Pro-Life feast?

The incarnation of the Word was not only the work of the Father, Son and Spirit – the first consenting, the second descending, the third overshadowing – but it was also the work of the will and the faith of the Virgin. Without the three divine persons this design could not have been set in motion; but likewise the plan could not have been carried into effect without the consent and faith of the all-pure Virgin. Only after teaching and persuading her does God make her his Mother and receive from her the flesh which she consciously wills to offer him. Just as he was conceived by his own free choice, so in the same way she became his Mother voluntarily and with her free consent.
(St. Nicholas Cabasilas’ Homily on the Annunciation 4-5)

Let us pray.
Shape us in the likeness of the divine nature of our Redeemer,
whom we believe to be true God and true man,
since it was your will, Lord God,
that he, your Word, should take to himself our human nature
in the womb of the Blessed Virgin Mary.
He lives and reigns with you in the unity of the Holy Spirit,
God for ever and ever.
Amen.

It’s OK to Eat Meat Tomorrow, Even Though It’s a Friday in Lent

Eating meat: permitted on the Annunciation

Citing Canon 1251, various dioceses, Catholic bloggers, and even secular newspapers are noting that the obligation to abstain from meat is abrogated on Friday, March 25, because it is the Solemnity of the Annunciation.
Source(s): these links will take you to other sites, in a new window.

I bind unto myself today
The strong Name of the Trinity,
By invocation of the same,
The Three in One and One in Three.
I bind this day to me for ever.
By power of faith, Christ’s incarnation;
His baptism in the Jordan river;
His death on Cross for my salvation;
His bursting from the spicèd tomb;
His riding up the heavenly way;
His coming at the day of doom;*
I bind unto myself today.
I bind unto myself the power
Of the great love of the cherubim;
The sweet ‘well done’ in judgment hour,
The service of the seraphim,
Confessors’ faith, Apostles’ word,
The Patriarchs’ prayers, the Prophets’ scrolls,
All good deeds done unto the Lord,
And purity of virgin souls.
I bind unto myself today
The virtues of the starlit heaven,
The glorious sun’s life-giving ray,
The whiteness of the moon at even,
The flashing of the lightning free,
The whirling wind’s tempestuous shocks,
The stable earth, the deep salt sea,
Around the old eternal rocks.

I bind unto myself today
The power of God to hold and lead,
His eye to watch, His might to stay,
His ear to hearken to my need.
The wisdom of my God to teach,
His hand to guide, His shield to ward,
The word of God to give me speech,
His heavenly host to be my guard.
Against the demon snares of sin,
The vice that gives temptation force,
The natural lusts that war within,
The hostile men that mar my course;
Or few or many, far or nigh,
In every place and in all hours,
Against their fierce hostility,
I bind to me these holy powers.
Against all Satan’s spells and wiles,
Against false words of heresy,
Against the knowledge that defiles,
Against the heart’s idolatry,
Against the wizard’s evil craft,
Against the death wound and the burning,
The choking wave and the poisoned shaft,
Protect me, Christ, till Thy returning.
Christ be with me, Christ within me,
Christ behind me, Christ before me,
Christ beside me, Christ to win me,
Christ to comfort and restore me.
Christ beneath me, Christ above me,
Christ in quiet, Christ in danger,
Christ in hearts of all that love me,
Christ in mouth of friend and stranger.
I bind unto myself the Name,
The strong Name of the Trinity;
By invocation of the same.
The Three in One, and One in Three,
Of Whom all nature hath creation,
Eternal Father, Spirit, Word:
Praise to the Lord of my salvation,
Salvation is of Christ the Lord. 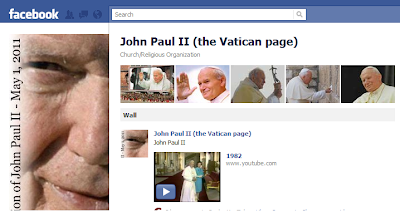 VIS announced that the Vatican has set up a Facebook page and a YouTube page for the upcoming beatification this May 1st of the Venerable John Paul II.

Fasting and Alms Giving – the Wings of Prayer

“Today, with the austere symbol of the ashes, we enter the period of Lent, beginning a spiritual journey which prepares for a worthy celebration of the Paschal mysteries. The ashes … are a sign reminding us of our status as created beings and inviting us to penance, to intensify our commitment to conversion so as to continue following the Lord”

In Church tradition the period of Lent is characterised by practices such as fasting, almsgiving and prayer, said Pope Benedict, explaining how fasting “means abstaining from food, but it also includes other forms of privation for a more abstemious life”. It “is closely linked to almsgiving … which under the one name of ‘mercy’ embraces many good works”. Moreover, during this period the Church “invites us to a more trusting and intense prayer, and to prolonged meditation on the Word of God”.
“On this Lenten journey”, the Pope concluded, “let us be attentive to welcoming Christ’s invitation to follow Him more decisively and coherently, renewing the grace and commitments of our Baptism, so as to abandon the old man who is in us and clothe ourselves in Christ, thus reaching Easter renewed and being able to say with St. Paul ‘it is no longer I who live, but it is Christ who lives in me'”.