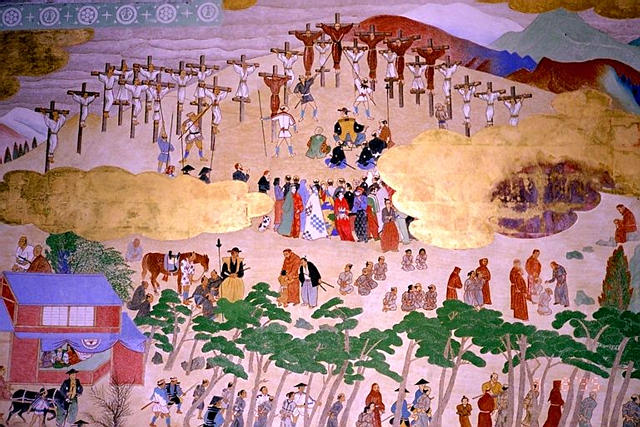 From an account of the martyrdom of Saint Paul Miki and his companions, by a contemporary writer (Office of Readings)

The crosses were set in place.  Father Pasio and Father Rodriguez took turns encouraging the victims. Their steadfast behaviour was wonderful to see.  The Father Bursar stood motionless, his eyes turned heavenward.  Brother Martin gave thanks to God’s goodness by singing psalms.  Again and again he repeated: “Into your hands, Lord, I entrust my life.”  Brother Francis Branco also thanked God in a loud voice.  Brother Gonsalvo in a very loud voice kept saying the Our Father and Hail Mary.

Our brother, Paul Miki, saw himself standing now in the noblest pulpit he had ever filled.  To his “congregation” he began by proclaiming himself a Japanese and a Jesuit.  He was dying for the Gospel he preached.  He gave thanks to God for this wonderful blessing and he ended his “sermon” with these words: “As I come to this supreme moment of my life, I am sure none of you would suppose I want to deceive you.  And so I tell you plainly: there is no way to be saved except the Christian way.  My religion teaches me to pardon my enemies and all who have offended me.  I do gladly pardon the Emperor and all who have sought my death.  I beg them to seek baptism and be Christians themselves.”

Then he looked at his comrades and began to encourage them in their final struggle.  Joy glowed in all their faces, and in Louis’ most of all.  When a Christian in the crowd cried out to him that he would soon be in heaven, his hands, his whole body strained upward with such joy that every eye was fixed on him.

Anthony, hanging at Louis’ side, looked toward heaven and called upon the holy names – “Jesus, Mary!” He began to sing a psalm: “Praise the Lord, you children!” (He learned it in catechism class in Nagasaki.  They take care there to teach the children some psalms to help them learn their catechism).

Others kept repeating “Jesus, Mary!” Their faces were serene.  Some of them even took to urging the people standing by to live worthy Christian lives.  In these and other ways they showed their readiness to die.

Then, according to Japanese custom, the four executioners began to unsheathe their spears.  At this dreadful sight, all the Christians cried out, “Jesus, Mary!” And the storm of anguished weeping then rose to batter the very skies.  The executioners killed them one by one.  One thrust of the spear, then a second blow.  It was over in a very short time.

Hear our prayer, O Lord our God:
fill our minds with veneration of you
and make us love all men as we ought.
Through our Lord Jesus Christ, your Son,
who lives and reigns with you in the unity of the Holy Spirit,
God for ever and ever.
Amen.

Saint Agatha has been venerated as a virgin and martyr since the time of her death in AD 251.  Besides the Blessed Virgin Mary, she is only one of seven women saints commemorated in the Roman Canon (Eucharistic Prayer 1) and as early as the fifth century had two churches in Rome dedicated to her.  Born in Sicily to a noble family, Agatha was a devout Christian who dedicated her virginity to God.  Pursued by Quintianus, a prefect or governor, she rebuffed his advances.  He had Agatha arrested for being a Christian and forced her to renounce Christ.

Her documented legend speaks of the brutal interrogations and torture she endured at his hand.  When she refused she was imprisoned in a brothel, then a prison, stretched on the rack, burned with red hot irons and had her breasts cut off.  She had a apparition of St. Peter as a physician and was miraculously healed of her wounds.  Four days later upon further interrogation and to the surprise of her torturers, she was condemned to death by rolling her naked body in broken glass and hot coals.  At the very moment of her final torture a great earthquake struck the region.  Immediately before her death Saint Agatha was heard praying, “O Lord Jesus Christ, good Master, I give You thanks that You granted me victory over the executioners’ tortures.  Grant now that I may happily dwell in Your never-ending glory”.
For more reading, go here and here.
Saint Agatha is the patron saint of breast cancer and victims of sexual assault.

O Heavenly Father,
Who raised Agatha
to the dignity of Sainthood,
we implore Your Divine Majesty
by her intercession
to give us health of mind,
body and soul.
Free us from all those things
which hold us bound to this earth,
and let our spirit, like hers,
rise to your heavenly courts.
Through Jesus Christ,
Your Son, our Lord,
Who lives and reigns
with You, forever. Amen. 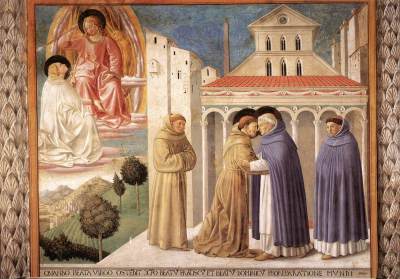 Pope Benedict has dedicated these past Wednesday Audiences to teaching about the great mendicant friars, St. Francis and St. Dominic.  These two pillars of renewal were called by the Spirit to transform the “dramatic and disquieting situation of the Church at that time, with her superficial faith that neither formed nor transformed life, her clergy little committed to its duties,…and the interior decay of her unity due to the rise of heretical movements”. 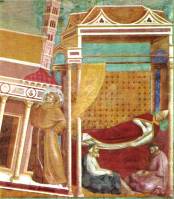 At last week’s Wednesday Audience Pope Benedict dedicated his catechesis to St. Francis of Assisi, referring to him as “a true giant of sanctity who continues to enthrall many people of all ages and religious beliefs”.  The Holy Father mentioned Pope Innocent III’s dream in which he saw the Basilica of St. John Lateran about to collapse, but a ‘small insignificant friar’ held it up to prevent its fall.  Pope Innocent recognized the friar to be Francis.  “Innocent III was a powerful Pontiff, who possessed profound theological culture as well as great political power, but it was not he who renewed the Church.  It was the ‘small and insignificant’ friar, it was Francis, called by God.  Yet important to recall that Francis did not renew the Church without the Pope or against the Pope, but in communion with him.  The two things went together: Peter’s Successor, the bishops and the Church founded on apostolic succession, and the new charism that the Spirit had created at that moment to renew the Church”.

At today’s audience Pope Benedict heralded the life and legacy of Saint Dominic, founder of the Order of Preachers.  Shortly before his birth in Caleruega, Spain in 1170, his mother, Bl. Juana of Osma, dreamed that a dog leapt from her womb carrying a torch in its mouth and seemed to set the world ablaze.  Dominic “distinguished himself for his interest in the study of Sacred Scriptures and his love for the poor”.  After his ordiantion to the priesthood and election as a canon of the cathedral of Osma “he did not consider this as a personal privilege, nor as the first step in a brilliant ecclesiastical career; rather, as a service to be rendered with dedication and humility.  Do not career and power represent a temptation to which even those who have roles of leadership and government in the Church are not immune?” the pope asked.

Upon traveling on diplomatic missions St. Dominic became aware of “the existence of peoples still un-evangelized,…and of the religious divides that weakened Christian life in the South of France, where activity of certain heretical groups created disturbance and distanced people from the truth of the faith”.  Dominic was asked by Pope Honorius III “to dedicate himself to preaching to the Albigensians” and he “enthusiastically accepted the mission, which he undertook through the example of his own life of poverty and austerity, through preaching the Gospel and through public discussions”.

It was Dominic’s itinerant apostolic life, rooted in “solid theological formation”, “founded on Holy Scripture but respectful of the questions raised by reason” that sparked renewal in the Church.  Pope Benedict teaches that “Christ is the most precious treasure that men and women of all times and places have the right to know and love!  It is consoling to see how also in today’s Church there are many people (pastors and lay faithful, members of ancient religious orders and of new ecclesial movements) who joyfully give their lives for the supreme ideal of announcing and bearing witness to the Gospel”.  He encouraged everyone, “pastors and lay people, to cultivate this ‘cultural dimension’ of the faith, that the beauty of Christian truth may be better understood and the faith truly nourished, strengthened and defended.  In this Year for Priests, I invite seminarians and priests to respect the spiritual value of study.  The quality of priestly ministry also depends on the generosity with which we apply ourselves to studying revealed truths”.

Pope Benedict concluded, “With his sanctity, he shows us two indispensable means for making apostolic activity more incisive; firstly Marian Devotion, especially the praying of the Rosary which his spiritual children had the great merit of popularizing, and secondly, the value of prayers of intercession for the success of apostolic work”.

Pray for all Franciscans and Dominicans, an increase in vocations to their consecrated life, and a renewed fidelity to their great founders’ calling to make the most precious Treasure known, loved and defended.

Saint Francis and Saint Dominic pray for us!

You were the Church’s instrument
in strengthening the teaching of true doctrine;
you shone forth from the West like a sun dispelling the errors of the heretics.
Righteous Leo, entreat Christ God to grant us His great mercy.

“Little is known about the early life of this man who proved to be such an extraordinary shepherd of the Catholic Church that he came to be known not only as Pope Saint Leo I, but also is one of the only two Popes in two thousand years to be called “the Great.” What we do know is that as a deacon of the Roman Church, before being elevated to the office of Pope in 440 AD, St. Leo the Great had opposed the heresy of Pelagianism which taught that grace was not necessary for salvation, but was rather a bonus that God granted to those who earned it by their good works. As Pope, St. Leo the Great was forceful and unambiguous in his Christological teaching which affirmed the full divinity and humanity of Christ. In fact his most famous writing, commonly known as the Tome of St. Leo (449), was the basis of the Council of Chalcedon’s (451) dogmatic definition of Christ as one Divine Person possessing two complete natures, human and divine.

During his pontificate the Council of Chalcedon was convened. It condemned many popular heresies of the day, and declared that the two natures of Jesus were indivisible. Pope Leo had already defended this doctrine in the epistle called the Tome. When the Council Fathers read it they declared, “This we all believe. Peter has spoken through Leo.”

St. Leo the Great was Pope during the middle of the fifth century, a troubled time when barbarian armies were ravaging the once mighty Roman Empire. For all intents and purposes, the Western Empire was in total political and military collapse and there was a vacuum of political leadership. Pope St. Leo filled the void and became the advocate for the temporal as well as spiritual needs of his flock. He is perhaps most famous for persuading Attila the Hun to abandon his plans to sack the city of Rome and to withdraw his forces beyond the Danube river (452). St. Leo once again was the spokesperson for the Roman citizenry in 455 when the Vandal barbarians swept into Central Italy, securing concessions from them.

Through both his powerful teaching and his leadership, Pope St. Leo the Great very much strengthened the office of the Papacy and made a strong biblical case for the Divine institution of this ministry by examining the biblical evidence for Peter’s unique role among the apostles.”