Faith and reason, irrationality and terror 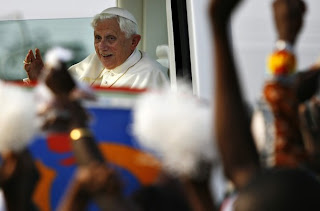 Published: Friday, September 4, 2009
The media’s obsession with salvation-through-latex in the matter of AIDS prevention in Africa so dominated the coverage of Pope Benedict XVI’s March pilgrimage to Cameroon and Angola that one of the most impressive addresses of the pontificate was virtually ignored.

Delivered to the Muslim leaders of Cameroon at the apostolic nunciature in Yaounde on March 19, Benedict’s concise remarks represented perhaps the most refined statement of the point the Pope has been making since his September 2006 Regensburg Lecture sent the world press into another tailspin.

Here are the key passages:

“My friends, I believe a particularly urgent task of religion today is to unveil the vast potential of human reason, which is itself God’s gift and which is elevated by revelation and faith. Belief in the one God, far from stunting our capacity to understand ourselves and the world, broadens it. Far from setting us against the world, it commits us to it.

“We are called to help others see the subtle traces and mysterious presence of God in the world which he has marvelously created and continually sustains with his ineffable and all-embracing love. Although his infinite glory can never be directly grasped by our finite minds in this life, we nonetheless catch glimpses of it in the beauty that surrounds us.

“When men and women allow the magnificent order of the world and the splendor of human dignity to illumine their hearts, they discover that what is ‘reasonable’ extends far beyond what mathematics can calculate, logic can deduce, and scientific experimentation can demonstrate; it includes the goodness and innate attractiveness of upright and ethical living made known to us in the very language of creation.

“This insight prompts us to seek all that is right and just, to step outside the restricted sphere of our own self-interest and act for the good of others. Genuine religion thus widens the horizon of human understanding and stands at the base of any authentically human culture. It rejects all forms of violence and totalitarianism: not only on principles of faith, but also of right reason. Indeed, religion and reason mutually reinforce one another since religion is purified and structured by reason, and reason’s full potential is unleashed by revelation and faith.”

For three years now, the Holy Father has been quietly insisting that the problem of jihadist terrorism and the lethal threat it poses, both to the West and to Muslims of moderate temperament, is rooted in the detachment of faith from reason. Cut that cord theologically, and you end up with a God of sheer willfulness who can command anything, including the murder of innocents. Tighten the cord that binds faith and reason in a mutually supportive synthesis and the religious case for jihadist terrorism collapses of its own irrationality.

No one knows why Islam, which in the early Middle Ages created cultures open to philosophical inquiry and respectful of the canons of reason, underwent what seems to have been a kind of intellectual shut-down, so that by the 14th century the wellsprings of intellectual imagination had largely dried up throughout the Islamic world, leaving only the endless exegesis of Islamic law by Muslim lawyers.

Whatever its causes, however, this desiccation was a crucial factor in creating the irrationalism of contemporary jihadism, embodied in the Taliban slogan, “Throw reason to the dogs — it stinks of corruption.”

It would be helpful if western governments took this history seriously — and took the Pope’s analysis of the problem of faith and reason seriously. It is not government’s task to foster the kind of interreligious dialogue implied by Benedict’s speech in Yaounde: an interreligious dialogue that aims to understand revelation through reason, thus opening up the prospects of a joint exploration of the “splendor of human dignity” and the implications of that dignity for religious freedom and the governance of just societies.

On the other hand, governments that don’t recognize that the detachment of faith from reason defines the fault-line between the jihadists and the rest of us are likely to misread what remains a mortal threat, eight years after 9/11.

George Weigel is Distinguished Senior Fellow of the Ethics and Public Policy Center in Washington, D.C.